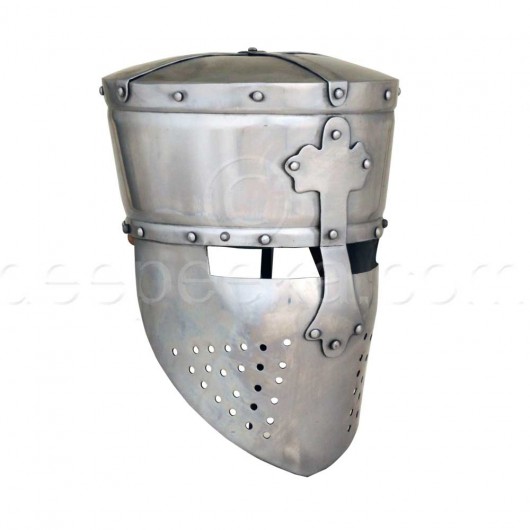 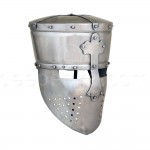 Price: $171.00 Prices, if shown, are suggested and indicative Retail price. They will vary in different countries and with different distributors. Please get in touch with your local distributor for correct pricing and current stock levels
SKU:AH6110

The Templar Helmet is a reproduction of style of helmet that was typically used by the crusaders, and the Knights Templar, for the whole duration of the Crusades. It is also called a pot helm, as it has resemblance to a pot.This helmet was designed to offer the maximum protection possible to the head.This helmet has a cross on its eyelet that enhances the design.Also included on the helm are a series of cross traceries, which improve air-flow inside the helm.

The flat top crusader helmet was worn around 1200 AD; from the 3rd to the 5th crusades.
The Templar Mask Great Helm is based on the transitional helms of the Crusades era, particularly those that were used from the 3rd Crusade, on to the 5th. It is particularly noteworthy for its unique design, as well as its use by the legendary Templars.
This helmet echoes the look of a great helm, found in earlier Crusade eras, but with a few minor changes that make it a more transitional model in the evolution of the helm. Like the great helm, it features a cylindrical design with a flat top, which is reinforced by rivets and metal bands across the crown. Where this helm differs from the great helm, is that it does not cover the head entirely. Instead, the crown and skull covers the top of the head, while the front face mask, adorned with a stylized cross, wide eyelets, and ventilated holes, covers the face, while leaving the back of the head completely uncovered. The effect is that this helmet is better ventilated, while still providing similar protection from the front!