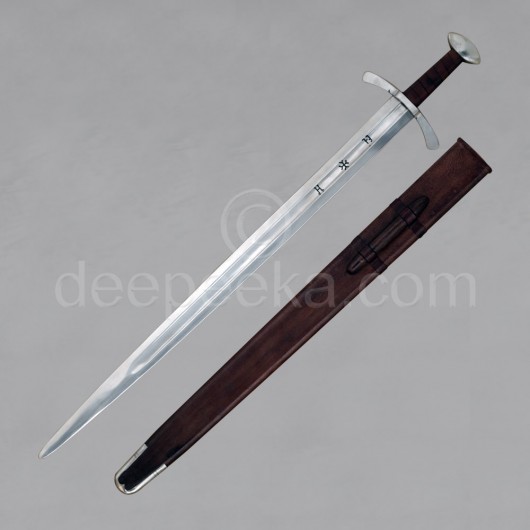 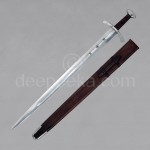 Price: $200.00 Prices, if shown, are suggested and indicative Retail price. They will vary in different countries and with different distributors. Please get in touch with your local distributor for correct pricing and current stock levels
SKU:AH6974

The St.Maurice Sword dates back to 13th century.It was intended to be used from the horseback.It has a leather grip and a single fuller running down the center of the blade.It is Battle ready and comes with a scabbard.

St. Maurice, also known as Mauritius, was the leader of the legendary Roman Theban Legion during the 3rd century. This 13th C. Sword of St. Maurice venerates him and his actions, which made him the patron saint of soldiers, knights, and warriors of all sorts. According to history, Maurice refused a direct command for his Emperor, demanding that he venerate the Roman gods – a sacrilege to Maurice and his legion, who were all Christian. Ornate symbols are emblazoned on the sword at the waist, near the guard, while the cast-steel concave guard furthers its look and form as a classic medieval sword. With this 13th C. Sword of St. Maurice, you can celebrate the patron saint of knights, soldiers, and warriors the world over, while also arming yourself with a sword that any knight would gladly have wielded, too.
This sword is available in “R” & “F” Versions. “R” is regular version is tempered and hardened and features traditional shaping, making it a great choice for display or carrying to complete your look.
“F” Version is combat version, the blade is heat treated, edges are around 2mm thick and the tip of the blade is “rounded off” making it suitable for light use in sparring and reenactment.
We offer the following scabbard option for each version as under :
AH6950-DX Deluxe Scabbard
AH6950-HG Hangar Scabbard
AH6950-LP Loop Scabbard
AH6950-ST Standard Scabbard
AH6950-ZS "Z" Scabbard