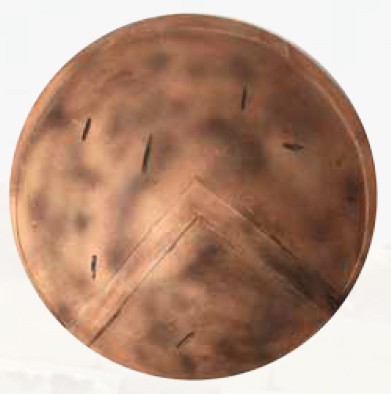 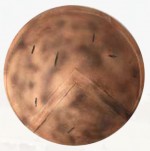 Price: $228.00 Prices, if shown, are suggested and indicative Retail price. They will vary in different countries and with different distributors. Please get in touch with your local distributor for correct pricing and current stock levels
SKU:AH3726

Bronze faced hoplon shield with modest detailing in inspired by the Spartan period.

Historical Period:- The army led by Alexander the Great into the Persian Empire included Greek heavy infantry in the form of allied contingents provided by the League of Corinth and hired mercenaries. These infantrymen would have been equipped as hoplites with the traditional hoplite panoply consisting of a thrusting spear (doru), bronze-faced hoplon shield and body armour..

Inspiration:- One early proto-Corinthian (ca. 700 BC) pottery depiction shows figures looking like 'hoplites', ie. armoured spearmen carrying large round shields, alongside other lighter warriors with the Geometric-period 'dipylon' shield that is usually depicted slung on its bearer's back. It seems that the 'Argive' shield (as the hoplon was frequently called by Classical sources) was therefore introduced before the phalanx rather than vice versa - it seems unlikely that dipylon-bearing warriors would, or could fight in a rigid phalanx. However, once the phalanx was introduced, it spread rapidly: even Greek states in Asia that were previously cavalry powers, such as Colophon, had made the transition by ca. 650 BC.