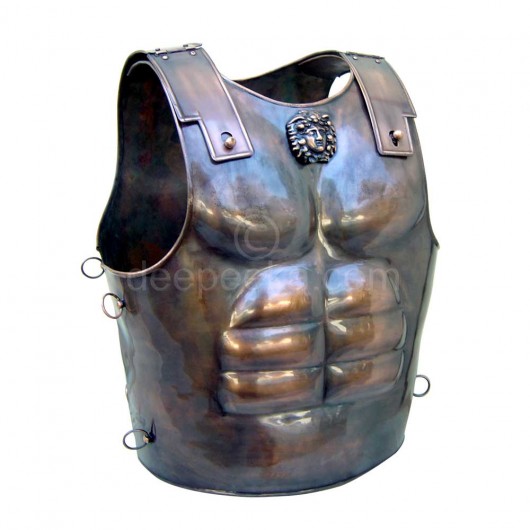 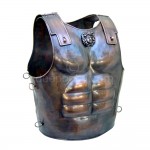 Price: $262.00 Prices, if shown, are suggested and indicative Retail price. They will vary in different countries and with different distributors. Please get in touch with your local distributor for correct pricing and current stock levels
SKU:AH3876

A central Gorgon's head medalion with burnished bronze finish and small rings that can be used as a harness or to secure the armour. Designed to protect the torso.

Historical Period:- In classical antiquity, the muscle cuirass or heroic cuirass is a type of body armor cast to fit the wearer's torso and designed to mimic an idealized human physique. It first appears in late Archaic Greece and became widespread throughout the 5th and 4th centuries BC. It is commonly depicted in Greek and Roman art, where it is worn by generals, emperors, and deities during periods when soldiers used other types.

Inspiration:- In Roman sculpture, the muscle cuirass is often highly ornamented with mythological scenes. Archaeological finds of relatively unadorned cuirasses, as well as their depiction by artists in military scenes, indicate that simpler versions were worn in combat situations. The anatomy of muscle cuirasses intended for use might be either realistic or reduced to an abstract design; the fantastically illustrated cuirasses worn by gods and emperors in Roman statues usually incorporate realistic nipples and the navel within the scene depicted.

Features:-
A central Gorgon's head medalion.
Burnished bronze finish.
Small rings that can be used as a harness or to secure the armor.