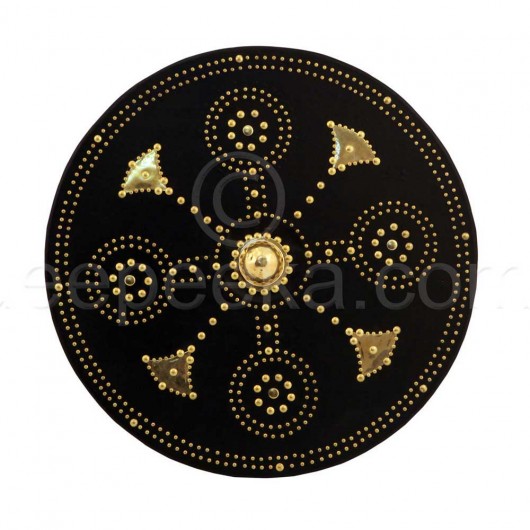 Price: $190.00 Prices, if shown, are suggested and indicative Retail price. They will vary in different countries and with different distributors. Please get in touch with your local distributor for correct pricing and current stock levels
SKU:AH3999

The Targe is basically another name for shield.It was mainly used by the troppers from 13th century to 16th century.Its design was concieved in Spain.It is a concave shield fitted  fitted with enarmes on the inside, one adjustable by a buckle, to be attached to the forearm, and the other fixed as a grip for the left hand.
The preferred shield of the Highland warrior was the targe. Slightly smaller than the typical medieval round shield, this Brass Studded Scottish Targe is a reproduction of the Scottish shield, in all its impressive detail and adorned glory. Targes were used successfully up until the Battle of Culloden, in 1746, at which point they were banned, and many were destroyed. This recreation reflects the look not of a typical soldiers targe, but instead, the targe of any number of important persons. The shield itself is made from wood, with a black leather covering on the front. In true reflection of the ornate Highland targes, this piece also possesses a rich level of decoration, including a fine brass boss at the center, ringed by brass studs and rivets all about its circular face. Concentric circles are among the most common shapes on this targe, which recreates one of the two more common patterns that were used in targe design. This targe is slightly larger than is traditional as well, measuring in at a 24 inch diameter. With its intricate and fine detail, this Brass Studded Scottish Targe is more of a decorative piece, one that will serve well as a cultural display piece in your collection, as well as a fine addition to any Highland attire that you might wear, too.