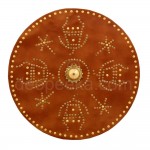 Price: $166.00 Prices, if shown, are suggested and indicative Retail price. They will vary in different countries and with different distributors. Please get in touch with your local distributor for correct pricing and current stock levels
SKU:AH3995

The Targe is basically another name for shield.It was mainly used by the troppers from 13th century to 16th century.Its design was concieved in Spain.It is a concave shield fitted  fitted with enarmes on the inside, one adjustable by a buckle, to be attached to the forearm, and the other fixed as a grip for the left hand.
The shield of the Scottish highlander, the Targe was nearly as symbolic of the Highlands as its battle compatriot, the Scottish basket-hilt sword. The Targe was not only protection but a weapon as well – the metal center shield boss (sometimes with a spike for effect) could pound and bludgeon foes. Many Scots decorated their targe with the cloth from fallen English soldier’s uniforms, and studded them with the buttons from their red coats. Not only used to defend against blade and bayonet, the Scots used the targe to protect against English musket ball and grapeshot. After the Scottish defeat at the Battle of Culloden in 1745, the targe was banned as part of an English attempt to weaken Gaelic culture.

This wooden targe is covered with leather in the front. The back is animal skin. The targe is decorated with brass studs and a brass shield boss.