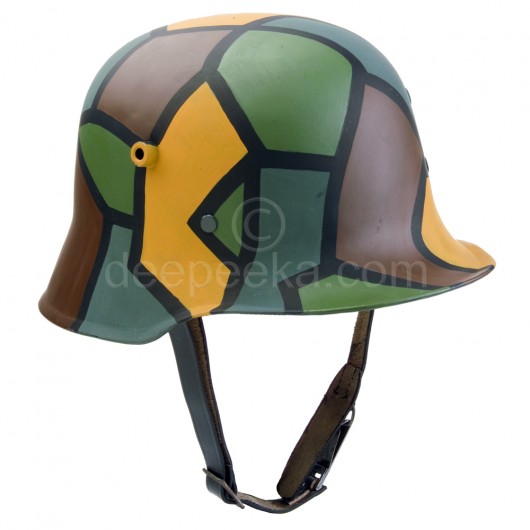 Price: $109.00 Prices, if shown, are suggested and indicative Retail price. They will vary in different countries and with different distributors. Please get in touch with your local distributor for correct pricing and current stock levels
SKU:AH6044P

This helmet was introduced to the German troops in April 1916 as it was needed for trench warfare in the Great War of 1914 to 1918. We are now offering the modified version of 1918. Factory issue helmets were generally field gray in color. Troops often repainted their helmets in camoflague colors, although factory-applied camoflague paint was documented. German Army Order II.No 91 366, signed by General Ludendorff on July 7, 1918, outlined official standards for helmet camoflague. The order stipulated that helmets should be painted in several colors, separated by a finger-wide black line. The colors should be relevant to the season, such as using green brown and ochre during the summer. When the winter came, they should have been painted white, but the war was already over, as everybody knows, on November 11th.

Please note that it comes with a liner.