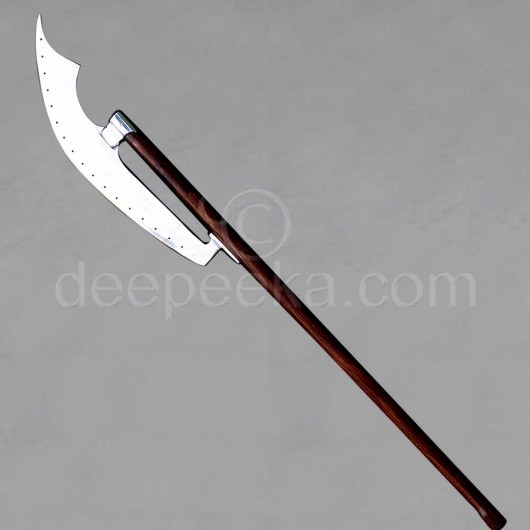 Price: $119.00 Prices, if shown, are suggested and indicative Retail price. They will vary in different countries and with different distributors. Please get in touch with your local distributor for correct pricing and current stock levels
SKU:AH3508

A pole weapon or polearm is a close combat weapon in which the main fighting part of the weapon is fitted to the end of a long shaft, typically of wood, thereby extending the user's effective range. Glaives, poleaxes, halberds, and naginata are all varieties of polearms.
The bardiche was a popular style of pole axe that was used throughout Eastern Europe during the medieval and the renaissance period. The Battle Bardiche behaves like a large axe with an oversized blade, making it perfectly suited for cleaving. The traditional bardiche was often regarded as something of a middle-range item that merges the effectiveness of a pole arm with the cleaving power of an axe. This bardiche features a broad, curved cleaving head that is mounted on a short haft, which gives the wielder a good deal of control over the larger blade, while also allowing for a broad swing that generates much more force. This bardiche blade is mounted to its haft via a socket and a side-mount. Unlike most pole arms, which could double over as a spear, this bardiche mimics an axes look and shape, which means that the back-curved blade lacks a point for effective thrusting.