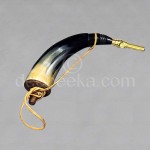 Price: $26.00 Prices, if shown, are suggested and indicative Retail price. They will vary in different countries and with different distributors. Please get in touch with your local distributor for correct pricing and current stock levels
SKU:AH3951

A powder horn was used in medieval period as a container for gunpowder, and was generally created from cow, ox or buffalo horn. This version of Deepeeka is completely usable and can be used as a decorative piece also.

The use of the Powder Horn goes back to the Middle Ages where they were used to carry gunpowder for early firearms. As firearms became more common during the renaissance and later periods, so too did the use of the powder horn. Powder horns, most commonly used with eighteenth century muskets, were used to carry gunpowder. They were mainly used for pistols and muskets but would also be used for the priming of large naval guns. The use of animal horn along with nonferrous metal parts ensured that the powder would not be detonated during storage and loading. It was not unknown for soldiers to polish the inside and outside of the horn to make them translucent enough to see how much powder they had left. Powder Horns were usually filled from the top and dispensed powder from the narrow point. A working powder horn based on a historical design. Constructed from real horn with a working brass valve. The wooden lid is tacked into place and can not be removed.

The working valve is crafted from brass and has an integrated spring pin that is pressed to open the valve to pour gunpowder. It is finished with a fitted leather cord for wear.

The lifespan of powder horn is lengthened by giving the exterior a light coat vegetable oil periodically. These powder horns are made from organic materials, therefore size and coloration will vary.