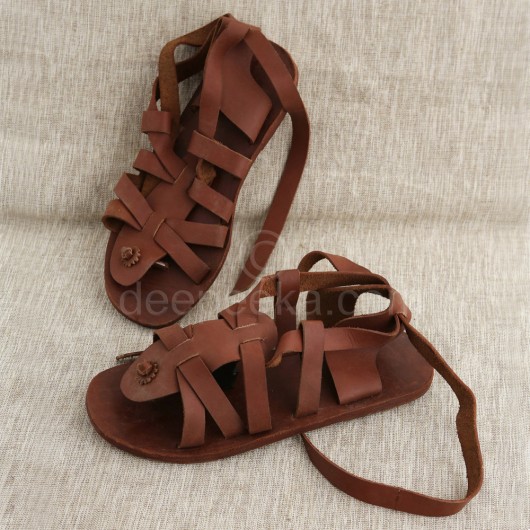 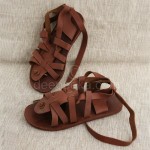 Price: $106.88 Prices, if shown, are suggested and indicative Retail price. They will vary in different countries and with different distributors. Please get in touch with your local distributor for correct pricing and current stock levels
SKU:AH3873

Descripion:- Early Minoan and Mycenaean men and women living between about 3000 b.c.e. and 1200 b.c.e. mostly went barefoot, but they did have a variety of sandals, shoes, and boots for outdoor wear. Early Greeks living between about 800 b.c.e. and 146 b.c.e. followed this tradition as well. All classes of Greeks went barefoot when indoors, removing their shoes when entering a house or temple. The proof of these practices has been discovered by archeologists, scientists who study the physical remains of the past. They have found that the outside steps of palaces and temples are far more worn down than the indoor steps, indicating that shoes were not worn indoors. Even outdoors, however, many children, slaves, and those who could not afford them wore no shoes. The Spartans, mainland Greeks who were famous for being great warriors, prided themselves on the toughness they showed by never wearing shoes. As shoemaking became a more developed craft, and shoes became more useful and comfortable, more and more Greeks began to wear them. Footwear of all sorts was made mostly of leather, and occasionally of felt, or smooth cloth, or wood. Greeks tanned the hides of cattle for the majority of their footwear and developed a process known as tawing to cure the softer hides of calves, sheep, and goats for the finest shoes. Tawing produced soft white leather shoes. Tanned hides were a natural tan color but were sometimes dyed black, red, or yellow. For the very wealthy, shoes could be gilded, or coated in gold. Footwear came in an abundance of styles. Styles were named after the place of origin, the famous people who made the style fashionable, as well as an assortment of specific names for certain styles. Greeks identified with their footwear so much that some people were given the nickname of their favorite shoe style.