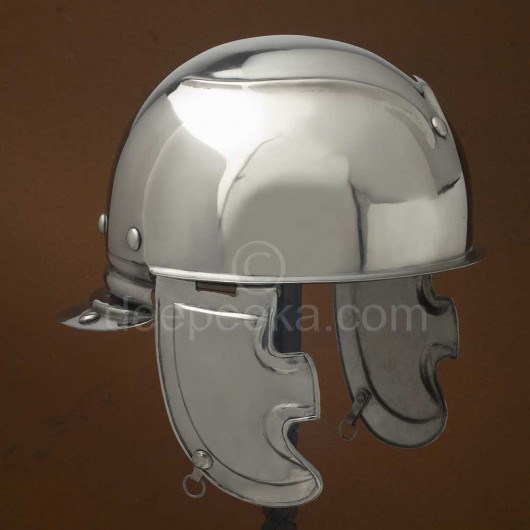 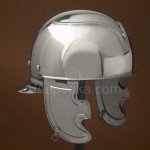 Price: $167.00 Prices, if shown, are suggested and indicative Retail price. They will vary in different countries and with different distributors. Please get in touch with your local distributor for correct pricing and current stock levels
SKU:AH6314N

Celtic “Port Bei Nedau” Helmet
The Port Type Helmet originated in Eastern Gaul. It is made of iron, fitted with cheekpieces, and embossed eyebrow decoration that helps to deflect blows. The neck guard is not of one-piece construction with the bowl as with its subsequent Roman counterparts, but is a separate section riveted to the bowl by 5 flat-headed rivets. At first it was produced and used by the various Gallic tribes around mid 1st century BC, however, during the Gallic Wars it was introduced to the Roman Army via Gallic auxiliaries serving to the Roman forces. Gallic craftsmen continued to manufacture this model for the Roman military and eventually it evolved into the Imperial Gallic Helmet. The Port Type Helmet was used from the period around the Gallic Wars until the early Augustan period. The most prominent example of Port Type Helmet was discovered in 1890 in the Thielle river near Port, Switzerland and it is currently exhibited in the Swiss National Museum. Elements of this design have been found in many places in Ribemont-sur-Ancre, Vernon and on the site of Alesia.

Features:-
Inspired from the collection at Royal Armouries in The Tower of London.
Steel helmet with hinged cheek plates.
Flared neck guard.

Descripion:- Early Celtic helmets are generally characterized by a conical or round shape with a protruding neck guard as well as cheek plates to protect the sides of the head.
Note that the classifications are those used by archaeologists, rather than Celts or Romans, who, if they did distinguish among these types, have left no known record of the terms they used.

Historical Period:- The Roman empire began expanding to the North around 540 BCE. As they did so, they encountered many hostile tribes and groups, resulting in battles over much of Europe during the following centuries.
As a result, there are many archaeological sites which provide valuable information on both Roman culture and that of the people they encountered.

Inspiration:- This helmet was inspired by surviving examples.