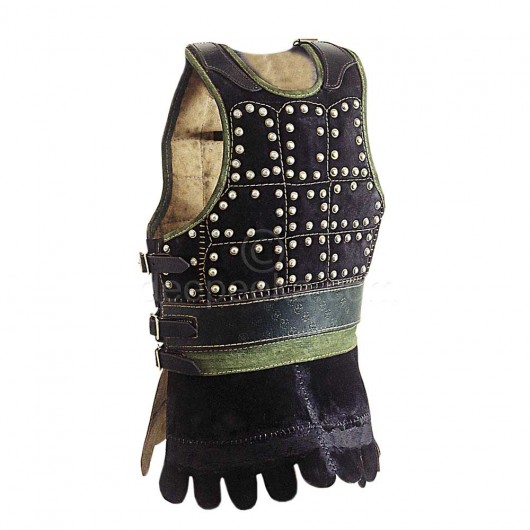 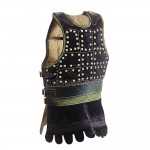 Price: $580.00 Prices, if shown, are suggested and indicative Retail price. They will vary in different countries and with different distributors. Please get in touch with your local distributor for correct pricing and current stock levels
SKU:AH6076L

A brigandine is a form of body armour, a cloth garment, generally canvas or leather, lined with small oblong steel plates riveted to the fabric. The form of the brigandine is essentially the same as the civilian doublet, though it is commonly sleeveless. However, depictions of brigandine armor with sleeves are known. Many brigandines appear to have had larger, somewhat 'L-shaped' plates over the lungs. The rivets, or nails, attaching the plates to the fabric are often decorated, being gilt or of latten and often embossed with a design.

Description: Brigandines were essentially a refinement of the earlier coat of plates, which developed in the late 12th century and typically were of simpler construction and used larger plates. Brigandines first appeared towards the end of the 14th century, but survived beyond this transitional period between mail and plate, and came into wide use in the 15th century, remaining in use well into the 16th. 15th century brigandines are generally front-opening garments with the nails arranged in triangular groups of three, while 16th century brigandines generally have smaller plates with the rivets arranged in rows.

It was commonly worn over a gambeson and mail shirt and it was not long before this form of protection was commonly used by soldiers ranging in rank from archers to knights. It was most commonly used by Men-at-arms. These wore brigandine, along with plate arm and leg protection, as well as a helmet. However, even with the gambeson and the mail shirt, a wearer was not as protected as when wearing plate, which was typically more expensive. The brigandine filled this gap very well. Brigandine was simple enough in design for a soldier to make and repair his own armor without needing the high skill of an armorer. A common myth is that brigandines were so-named because they were a popular choice of protection for bandits and outlaws. This is untrue. Originally the term "brigand" referred to a foot soldier. A brigandine was simply a type of armour worn by a foot soldier. It had nothing to do with its alleged ability to be concealed by bandits. In fact, brigandines were highly fashionable and were ostentaciously displayed by wealthy aristocrats both in European and in Asian courts.

The brigandine has been confused with the haubergeon, a similar form of body armour, as well as the brigantine, a swift small sea vessel.