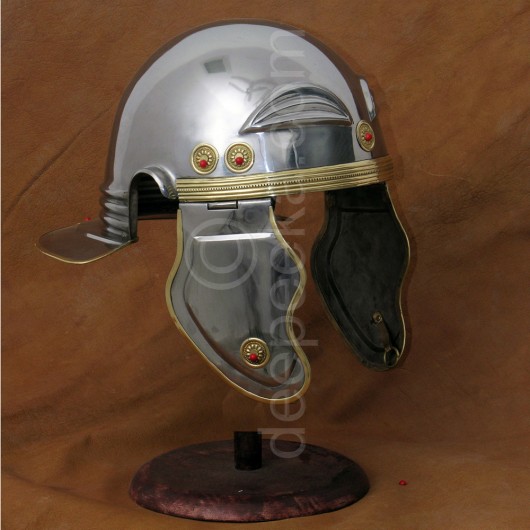 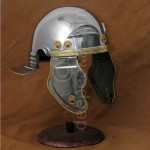 Price: $190.00 Prices, if shown, are suggested and indicative Retail price. They will vary in different countries and with different distributors. Please get in touch with your local distributor for correct pricing and current stock levels
SKU:AH6321

Weisenau Type Imperial Gallic 'B' Roman Helmet is a facsimile of one of the earliest iron helmets in use by the Augustan legions in the late 1st century BC, with the embossed eyebrow detail, rivet bosses are inlaid with glass (corals). Made out of 18 gauge steel and iron, with brass details that enhance this piece.

Initially identified by Russel Robinson as an imperial italic helmet, it is now known as imperial Gallic B. It is not equipped with a frontal peak, which is not totally widespread at this time. Late 1st cent BC, early 1st cent AD.
Made after a find made at Klakanje, Former Yugoslavia, now Croatia

Features:
Made out of 18 gauge steel and iron
real brass trim
rivet bosses are inlaid with glass (corals)

Size: Inner circumference of this helmet varies slightly, but is around 24 inches.

Inspiration: Based on a helmet discovered in a find in Klakanje, which was in Yugoslavia and now Croatia.