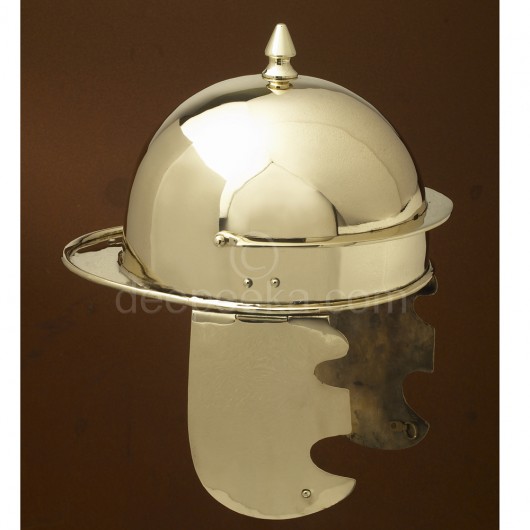 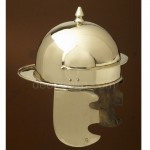 Price: $285.00 Prices, if shown, are suggested and indicative Retail price. They will vary in different countries and with different distributors. Please get in touch with your local distributor for correct pricing and current stock levels
SKU:AH6316N

This  helmet is like the Montefortino helmet, a type of Celtic, and later Roman, military helmet used from around 300 BC through the 1st century AD with continuing modifications. This helmet type is named after the region of Montefortino in Italy, where a Montefortino helmet was first uncovered in a Celtic burial.

The Coolus 'D' (Haltern) is an accurate replica ornate based off historical research and authentic in its design. The second known group of helmets, was the 'Coolus' variety, which covered the period 3rd century BC to at least 79AD.
This replica of a Coolus ´D´ Haltern helmet is based on a bowl found at Haltern in Germany. The cheek guards of the Coolus ´D´ Haltern were not found so the replica has ones replicating those of a similar find from Xanten (Germany)

Description: The Coolus helmet was a type of ancient Celtic and Roman helmet. It was produced from brass and, like the Montefortino type with which it co-existed, was a descendent of Celtic helmet types.