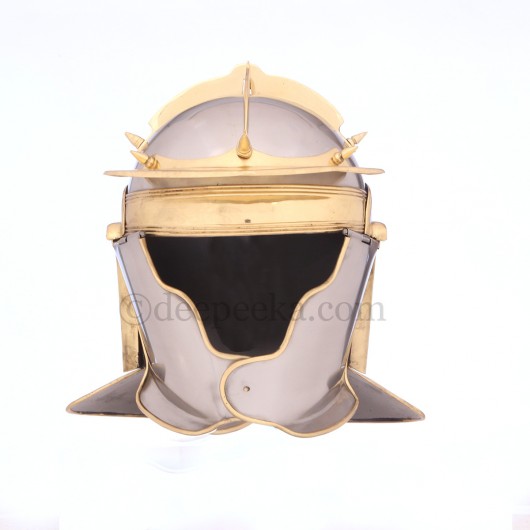 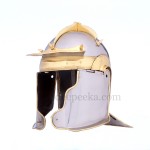 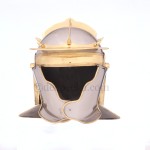 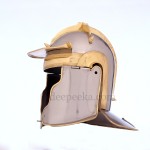 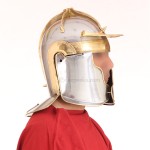 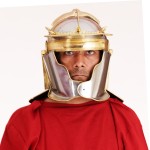 Price: $261.00 Prices, if shown, are suggested and indicative Retail price. They will vary in different countries and with different distributors. Please get in touch with your local distributor for correct pricing and current stock levels
SKU:AH6305N

Infantryman began to equip themselves with heavy cavalry helmets from around AD 200. Many of these helmets resemble those found at Niederbieber, in Germany, on the Rhine frontier. Note the huge neck guard, the way the ears are totally enclosed, the high, pointed brow guard and the raised crown re-inforcements. This was one truly armoured Roman helmet!"

This Roman Auxiliary Cavalry E Helmet was originally classified as a Roman Cavalry helmet, however was probably also in use by the Roman infantry of the time.

The Auxiliary Infantry 'E' original was found in Heddernheim near Frankfurt and is dated around the 2nd century a.d.

Historians believe it was worn by cavalry as well as by infantry.

Descripion: The typical Roman era helm is quite protective on its own, but this Von Gravert Helmet adds a few features and enhances others, all with the intent of giving added protection, as well as enhancing the look of the Roman soldier who wears it. This simple yet effective helmet features a raised cross-shaped ridge along the crown of the helmet, which adds strength and durability to the helm, while also helping to divert impacts down the side of the helm and away from the center of the skull. A visor is attached to the front, along with shirt spiked protrusions, which helps to protect the wearer's face. Large cheek protectors are attached via hinges at the sides of the helm and add additional protection to the face and chin, while leaving an open gap for the wearer to see. The back of the helmet slants down slightly against the wearer's neck, providing protect from the back as well.