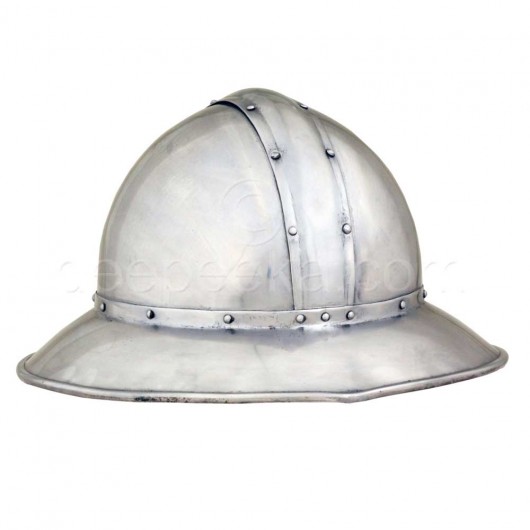 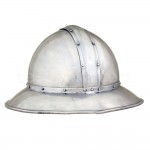 Price: $129.00 Prices, if shown, are suggested and indicative Retail price. They will vary in different countries and with different distributors. Please get in touch with your local distributor for correct pricing and current stock levels
SKU:AH3881

The kettle hat was a simple bowl with a big rand. It was particularly used by archers and sappers, for it allowed the head to move freely, gave a good protection against missiles coming from the top, and did not hinder eyesight.It will evolve later to become the Morion.It comes with an inner liner.
First produced in England around 1011, the kettle hat was the helm of choice of many foot soldiers and men-at-arms. As its name implies, this Archers Banded Kettle Helm would have been a good helm of choice for archers, thanks to its open design. The openness of it ensured that an archers vision would not have been impaired, ensuring that they can see with clarity and aim with ease, too. And best of all, this helm would still provide sufficient and solid protection from blows from above, either falling from on high or directed at the archers head! The hat features a curved brim, as well as a reinforced and riveted band across the meridian line, to help provide greater strength and resilience.

The Kettle Hat Helmet was the ideal piece to wear. Because it did not obstruct vision and allowed for ease of head movement, it offered great protection. It also paved the way for the Morion Helmet which followed in later years.