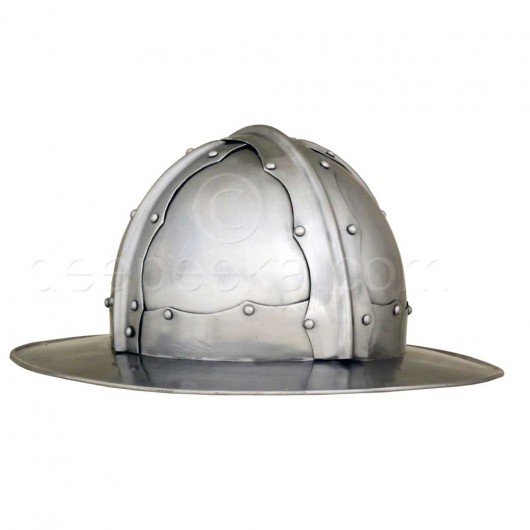 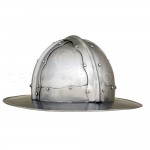 Price: $166.00 Prices, if shown, are suggested and indicative Retail price. They will vary in different countries and with different distributors. Please get in touch with your local distributor for correct pricing and current stock levels
SKU:AH3880

The kettle hat was a simple bowl with a big rand. It was particularly used by archers and sappers, for it allowed the head to move freely, gave a good protection against missiles coming from the top, and did not hinder eyesight.It will evolve later to become the Morion.It comes with an inner liner.
Around 1011, England produced what would become one of the most lasting helmets of the Medieval Era. This Reinforced Medieval Kettle Helm is of the same type of helmet that was favored by foot soldiers and infantry throughout and beyond the age. While this kettle hat was regarded as inferior by the noble classes for lacking the courtly appeal of the more elaborate knightly helmets, it was greatly favored by all others, because it offered a superior degree of protection, without hindering head-movement or decreasing vision. On this model, the skull-cap is reinforced by three metal strips, riveted across the centerlines of the helmet, as well as around the brim of the skull-cat.