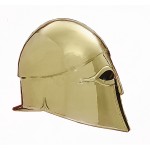 Price: $237.00 Prices, if shown, are suggested and indicative Retail price. They will vary in different countries and with different distributors. Please get in touch with your local distributor for correct pricing and current stock levels
SKU:AH6111

The Corinthian helmet originated in ancient Greece and took its name from the city-state of Corinth. It was a helmet made of bronze which in its later styles covered the entire head and neck, with slits for the eyes and mouth. A large curved projection protected the nape of the neck.

This early form of the Greek Corinthian helmet was used by the Spartan Hoplites from approximately 700 BC. The full face protection was valued for the close rank spear fighting of the time. However the restricted hearing and vision resulted in the eventual development of much simpler open face helmets by the classical period. The Early Spartan Helmet is made of brass.
This Spartan Corinthian helmet is patterned after earlier types of the Corinthian helmet, worn not merely by Spartans, but by Greeks all over the Aegean. Its overall appearance bears a close likeness to those of the early periods.