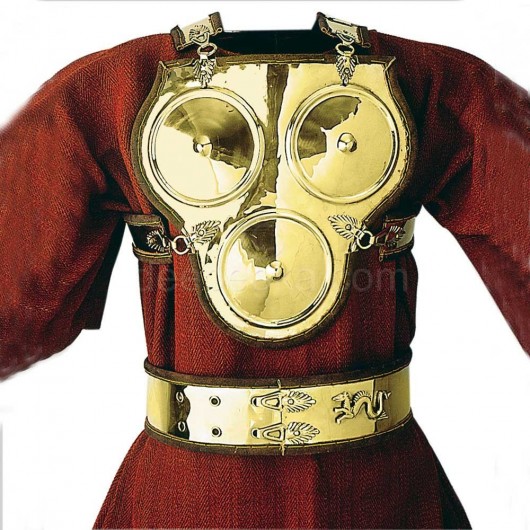 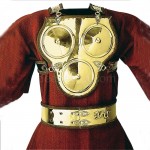 Price: $452.00 Prices, if shown, are suggested and indicative Retail price. They will vary in different countries and with different distributors. Please get in touch with your local distributor for correct pricing and current stock levels
SKU:AH6088B

This targe is based on an original, which was "captured" at the BATTLE OF CULLODEN in 1746, and taken south to London with the Jacobite prisoners.The accompaning brass belt was consider a sign of a warrior in Central Italy.

Historical Period: 450-30 BC Originally worn by Etruscan and Samnite warriors, this style was later adopted by the Samnite class of Roman Gladiators. The accompaning brass belt was consider a sign of a warrior in Central Italy.

This set of brass Samnite torso armor is composed of a 2-part cuirass and a wide brass belt. The Breastplate and Backplate are of brass backed with a layer of suede leather for comfort. The leather is also fitted over the edge of the plates to prevent the brass from damaging the clothing beneath. The breastplate has a set of riveted plates that hook into rings on the back plate to fit the armor together. Choosing which ring to hook it into adjusts it to size.
The wide belt is similarily constructed, being a wide band of brass backed and edged with suede leather and fitted together by a pair of hooks. Choosing which eyelet to hook it into adjusts the belt size.
This armor set will best fit someone with a small, or a smaller-medium sized torso and shoulders. The breast and backplate could be made to fit someone larger by either adding more linked rings to extend the size or by using some cord or leather ties to link the hooks and rings.
The trefoil cuirass with its distinctive three rondels is a type of armor strongly associated with the people of Samnium, a central Italian people who were contemporaries of the Etruscans; they famously warred with Rome in its earliest days. It took three wars for Rome to subdue the warriors of Samnium, and even then they lended a hand to both Pyrrhus of Epirus and Hannibal when they marched against Rome. Though afterwards subjugated by Rome and existing as a subservient client state for decades, the Samnite again took arms against the Romans in the revolt known as the ‘’Social War’’ of 90-88 BC. It ended with the subject Samnite people being granted the full Roman citizenship that they were fighting for. Rome could not deny them equal treatment under the law.
This replica is modeled after types found in central italy in the 4th century B.C. at sites such as Alfadena. It is a simple design that gives protection to the essential parts of the torso, likely a design intended to fashionably protect the vitals of the torso without using so much metal as to become prohibitively expensive for the soldier.