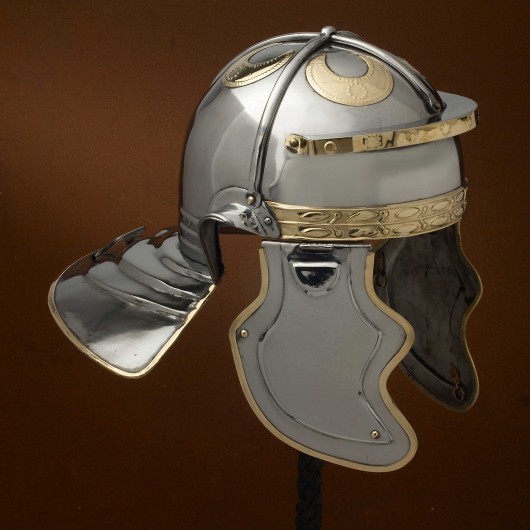 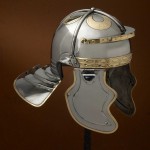 Price: $214.00 Prices, if shown, are suggested and indicative Retail price. They will vary in different countries and with different distributors. Please get in touch with your local distributor for correct pricing and current stock levels
SKU:AH6056N

This helmet is well researched and historically accurate,preferred for the Legio VI Victrix Pia Fidelis (California) reenactment group, which portrays a legion during the reign of Hadrian (AD 117-138).

Inspiration: Distinct type helmet was found in a cave near Hebron, Israel.

The Roman Imperial Italic G Helmet was said to have been found in a cave near Hebron, perhaps lost by a Roman legionary during the Bar Kochba Rebellion of 132-135 AD. Its incorporation of cross-bracing on the cranium is in keeping with a trend seen in other helmets of the early second century AD and beyond. This was perhaps initiated in response to the Dacians' deadly two handed scythe, the falx, encountered by Romans during Trajan's Dacian Wars in 101-102 AD and 105-106 AD.

The original helmet was found in a cave near Hebron and it is presumed that it may have been lost at the time of the Jewish uprising against the Romans in the years 132 till 135 AD.

While the thin brass cross-bracing on the Italic D was more decorative than functional, the heavy iron bars found on the Italic G were definitely intended to stop or deflect an overhead blow. The attractive lunate appliqués on the skull indicate the cross bracing was a part of the helmet's original manufacture, rather than a "field retrofit" as found on at least one surviving Imperial Gallic helmet.

Features:
Cross-bracing on the cranium.
Brass lunate appliqués on the skull plus other brass detailing.
No provisions for mounting a crest.
Preferred helmet for the Legio VI Victrix Pia Fidelis (California), which portrays a legion during the reign of Hadrian (AD 117-138).
Shipping Weight: 8kg