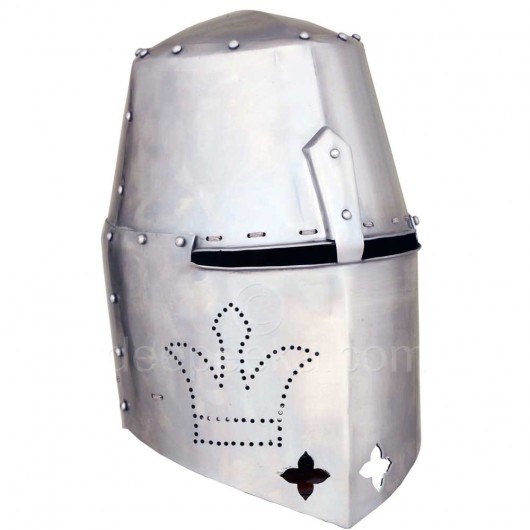 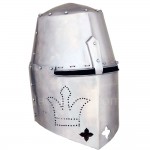 Price: $124.00 Prices, if shown, are suggested and indicative Retail price. They will vary in different countries and with different distributors. Please get in touch with your local distributor for correct pricing and current stock levels
SKU:AH6109

This Royal Over Bearer Great Helm  might have been worn with a secondary helm underneath,although it can be worn singly also. The sides of the helm are reinforced with rivets and strips of metal, while the face features narrow rectangular eyelets, as well as two small star cut-outs near the elongated front rim. Also adorning the helmets front is a crown pattern, made up of small punched-out holes.

The Over Bearer Great is an accurate replica ornate based off historical research and authentic in its design. The great helm or heaume, also called pot helm, bucket helm and barrel helm, of the High Middle Ages arose in the late twelfth century in the context of the crusades and remained in use until the fourteenth century. They were used by knights and heavy infantry in most European armies between about 1220 to 1540 AD, however they were used widely throughout Christian armies in the Third Crusade (1189-1192). This Great Helm is stoutly constructed from riveted plates of 14 gauge steel.

Please note that it comes with a padding.